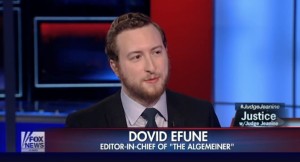 Palestinian incitement against Israelis is similar to the Nazi dehumanization of Jews before and during the Holocaust, Algemeiner Editor Dovid Efune said in an interview on Fox News‘ “Justice with Judge Jeanine” on Saturday night.

Commenting on the latest wave of Palestinian and Arab-Israeli stabbing, car-ramming, rock-throwing and shooting attacks in Israel, Efune said, “In order to want to have to go and stab somebody because of who they are, that person first has to be dehumanized. We saw this in 1939. Jews were dehumanized into Untermenschen before they were massacred by the Nazis, and today in Palestinian society, Jews are considered the children of apes and pigs and are accused of a litany of false crimes.”

He added, “The Palestinian Authority-controlled areas are the most antisemitic territories in the world, where, according to the Anti-Defamation League, 93 percent hold antisemitic views.”

Responding to a query about the response from White House officials to the violence, Efune said, “The Obama administration has a morality problem.”

“Here you have a situation where you have moral equivocation — you have references to the cycle of violence, calling on ‘both sides’ the whole time,” he said. “We know, Jeanine, that cops and robbers both shoot, but they are not the same, and to imply they are is simply immoral.”

Asked if this only applied to Israel, or to other countries as well, Efune mentioned the administration’s approach to Iran as another example of a failure to identify “evil.”

Watch the full clip of the interview HERE.