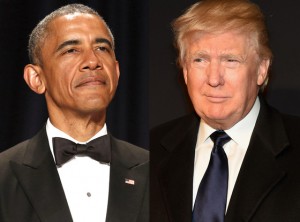 “So many friends in Israel, they don’t know what happened. They have a president who — they actually think Obama hates Israel. I think he does,” Trump said during a campaign speech in Reno, Nevada, on Thursday.

The comment came as Trump slammed the deal Obama struck with Iran over its nuclear program and suggested that Iran’s top negotiator was too tough for Secretary of State John Kerry.

Trump has often touted his pro-Israel bona fides on the campaign trail, and it’s not the first time Trump has suggested that Obama “hates” Israel.

Before announcing his run for the presidency, Trump in December 2014 retweeted a tweet suggesting the same.

“It is undeniable that Obama hates Israel,” read the tweet.

While Obama and Israeli Prime Minister Bibi Netanyahu have long had a frosty personal relationship, even Netanyahu has repeatedly described relations between the two countries as “stronger than ever” under Obama’s presidency.

Obama has been critical of Netanyahu’s at-times heated comments toward Palestinians and, like past U.S. presidents, has criticized continued settlement construction in the West Bank, but has also reaffirmed strong U.S. support for Israel.