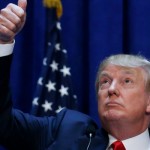 After watching Megyn Kelly’s Monday evening coverage of the primary campaign, Trump called her “very bad at math” and “the most overrated anchor” on the network, and labeled her staff “flunkies.”

The prompting for this rant was Kelly’s erroneous script that mislabeled the size of Trump’s lead in a recent national poll.

A network spokesperson confirmed that while the graphic was correct, the script was incorrect, and “will be corrected during tonight’s program.”