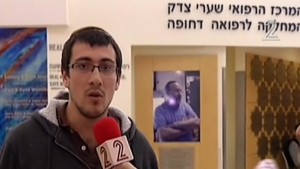 Doctors are fighting this afternoon to save the foot of a baby boy wounded a short time earlier in a Palestinian car-ramming terror attack at the entrance to Yerushalayim. A total of 14 people were hurt in the attack.

Speaking to Channel 2 television from Jerusalem’s Shaare Zedek Medical Center, one of the doctors there said there was a small chance of saving the 18-month-old baby’s foot.

The boy’s father Binyamin Sitbon, speaking from the hospital, said his son was “more or less good, he will be okay.”

Sitbon, who found out that his son was injured in the attack when his sister-in-law called him at work, explained that boy’s foot was “caught,” apparently under the attacker’s car, and “collapsed completely.”

Another two people — one a woman in her 70s — suffered moderate injuries and the rest of the victims suffered light injuries.

Nine of the victims were taken to Shaare Zedek Medical Center and five were treated at Hadassah Hospital Ein Kerem.

Police named the terrorist driving the car as Abed el-Muhsen Hassuna, a 21-year-old resident of the neighborhood of Beit Hanina. He was shot dead as he tried to exit the car. An ax and screwdriver were later found in the vehicle.

Shortly before 3 p.m., Hassuna drove his white Mazda sedan onto the sidewalk of Herzl Boulevard, smashing into pedestrians at a bus stop, close to the Chords Bridge and near the capital’s central bus station. The car also struck a fire hydrant, sending water shooting into the air.

A member of the security forces, a security guard and an armed civilian who saw the attack taking place shot the attacker dead before he was able to get out of his car and approach the civilians.

Jerusalem has been one of the two focal points of terror attacks since the latest wave of violence began in October, with the West Bank city of Hebron being the other. More than 20 Israelis have been killed since the start of the violence, and hundreds more have been wounded.