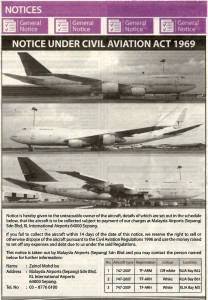 There are a few unusually large items lying at the lost and found counter of Kuala Lumpur International Airport.

Malaysia Airports Holdings Bhd. placed an advertisement Monday in the nation’s best-selling English daily asking for the “untraceable” owner of three Boeing Co. 747-200F planes to come and collect them. The planes are parked at three separate bays at KLIA in Sepang, outside the Malaysian capital, the Star newspaper ad showed.

“If you fail to collect the aircraft within 14 days of the date of this notice, we reserve the right to sell or otherwise dispose of the aircraft pursuant to the Civil Aviation Regulations 1996 and use the money raised to set off any expenses and debt due to us under the said regulations,” the notice read.

Nearly 40 years after 747s entered commercial service, Boeing is preparing to cut output of the iconic jumbo jetliners amid waning demand for four-engine planes and an air-cargo market hit by China’s slowing economic growth. Boeing no longer makes the 747-200, but the more modern 747-8 Freighter version is the company’s second-most expensive plane, with a list price of $379.1 million.

The three planes have been sitting on the KLIA tarmac for more than a year, said Zainol Mohd. Isa, the contact person listed in the ad. He declined to say how much in parking fees and other charges were owed to the air terminal.

“We have been in communication with the so-called owner, but they have not been responding to take away the aircraft. That’s why we go through this process to legalize whatever actions we want to take,” Zainol said by phone Tuesday. “We want to clear the area, we want to utilize our parking bay.”
Malaysia Airports and Boeing didn’t immediately reply to e-mails seeking comment.

At least one of the jets was operated by the cargo unit of Malaysia Airlines, which leased the plane from Air Atlanta Icelandic, a Kopavogur, Iceland-based lessor providing planes along with crew, maintenance and insurance services, according to Planespotters.net. Air Atlanta Icelandic didn’t reply to an e-mail seeking comment.

Some of these aircraft from Air Atlanta Icelandic were on wet lease to MASkargo, but the contract expired in April 2010, MASkargo said in an e-mail Tuesday.

“We have no further involvement with those aircraft since then,” MASkargo said.