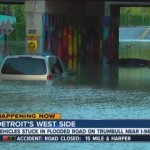 Because things couldn’t get rougher for Detroit, massive thunderstorms flooded the city on Monday, shutting down highways and stranding citizens.

There was at least one casualty when one woman died of cardiac arrest after being stranded in a vehicle. Dramatic pictures show cars floating on the roads-two interstates are still under 11 feet of water.

The police dispatched diving teams to count submerged cars and check for missing people, though none have been reported. State troopers have also been brought in.  Read more at The Detroit News.