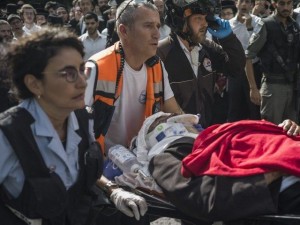 Israeli civilians who are not licensed to carry guns are arming themselves with selfie sticks, knives, pepper spray, and any other available object to defend themselves from Palestinian stabbing attacks.

In recent weeks, Palestinians have launched a spate of attacks against Jews, both soldiers and civilians, partially incited by Palestinian Authority President Mahmoud Abbas’s call to defend the Al Aqsa mosque from alleged encroachment.

In response, the Israeli government has called upon those citizens who are allowed to carry firearms to do so. Yet many Israelis are not.

Despite the familiar sight of rifle-toting Israeli soldiers on city streets, both in uniform and plainclothes, and despite the fact that much of the population is trained to operate firearms, Israel does not have a general right to gun ownership akin to the U.S. Constitution’s Second Amendment right to bear arms.

“[O]nly 2.5 percent of the population can legally carry a firearm,” the Times of Israel reported in 2012. “But those who are licensed to carry a weapon have proved capable of acting swiftly and effectively time and again to neutralize attackers during acts of terrorism.”

For the rest, the Times of Israel reported recently, there is pepper spray–and selfie sticks, rolling pins or frying pans. Whatever works.

The new wave of terror has set the population on edge. On Sunday, Israeli soldier Sgt. Omri Levi was stabbed to death in a bus station in the southern town of Beersheba. Security shot the attacker, but also mistakenly shot an Eritrean bystander, who was then set upon by an angry mob.

Vigilante action by Israelis is on the rise as Israelis grow frustrated with the inability of the government to stop the attacks–and attempts by the world to restrain it.