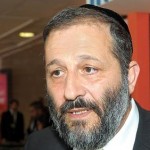 Aryeh Deri is returning to the ministry he resigned from 22 years ago.

Deri’s appointment as Interior Minister comes 22 years after he was forced to resign the position over corruption charges. He was subsequently found guilty of bribery and served 22 months in prison.

Yesh Atid leader MK Yair Lapid had proposed a bill in May 2015 that would have barred anyone convicted of a serious criminal offense from serving as an MK, cabinet minister or mayor. However, the coalition voted the bill down.

In April, Deri himself told Army Radio Galei Zahal that he had no intention of seeking the interior ministry portfolio. He said, “Today when I return to serving the public as a minister in the government, I want to serve the entire public and I am attentive to public criticism. Therefore I’ve decided I won’t fight for the Ministry of Interior.”