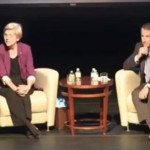 At an event yesterday at Tufts University in Massachusetts, Democratic senator Elizabeth Warren said it was “fair” when an activist compared Israel’s actions in Gaza to the Holocaust.

“Eva Moseley, I’m not a student, I’m not an alumnae, but was in faculty life. I was also a Holocaust refugee and I’m extremely concerned that Jews don’t do to another people what was done to them,” said the activist.

Earlier this year, the activist, Eva Steiner Moseley, signed on to a petition “Unequivocally Condemning Israel’s Ongoing Massacre In Gaza,” which it called “The Latest Chapter In More Than A Century Of Zionist Colonialism, Dispossession, Ethnic Cleaning, Racism, And Genocide — Including Israel’s Very Establishment Through The Uprooting And Displacement Of Over 750,000 Palestinians.”

Warren is a possible presidential candidate in 2016 Democratic primary.