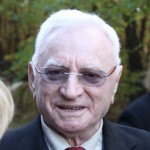 A Holocaust survivor of the Sobibor Nazi death camp who testified at the trial of alleged camp guard John Demjanjuk has died at the age of 88.

Polish-born Thomas (Toivi) Blatt was one of a few Jews who managed to escape the Sobibor camp in 1943. He lost his parents and brothers at the camp. Years later Blatt testified at Demjanjuk’s trial, which took place between 2009 and 2011. Demjanjuk was convicted in 2011 but continued to deny he was a guard at the camp until his death in 2012.

In an interview conducted in 2010, Blatt said that he “never escaped from Sobibor. I’m still there—in my dreams, in everything. My point of reference is always Sobibor.”

Blatt died on Wednesday in Santa Barbara, Calif. He is survived by his three children and several grandchildren.