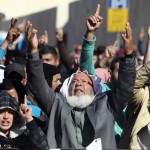 Democratic Rep. Loretta Sanchez believes anywhere between five to 20 percent of Muslims want to use terrorism to institute a global caliphate.

Appearing on Larry King’s Ora.tv show Thursday, the ten-term congresswoman said: “Certainly we know that there is a small group, and we don’t know how big that is — it can be anywhere between 5 and 20 percent, from the people that I speak to — that Islam is their religion.”

Those people, she added, have “a desire for a caliphate and to institute that in anyway possible.”

Sanchez is currently running for the U.S. Senate seat soon to be vacated by retiring Sen. Barbara Boxer. Read more at BuzzFeed.