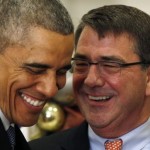 During a congressional hearing, Defense Secretary Ash Carter said he agrees with those who say that ISIS has not been contained.

General Dunford: “We have not contained ISIL.”

Do you agree with General Dunford?

MCCAIN: So if we have not contained ISIL, how are we to believe that we are suceeding against ISIL?

CARTER: Uh, I think that, um, we are, um, building momentum agaisnt ISIL. I would be very — I described the trajectory of that success all around Iraq, Syria, some actions we’re taking in Libya, it is not my principle responsibility… but I met with… officials to talk about what we could do more to strengthen the defense of the homeland, but our principle responsibility is to take the fight to them in Syria and Iraq, I’ve described the actions we’ve taken since I was here last time, and I think we are building momentum.