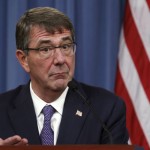 U.S. Secretary of Defense Ash Carter used his personal email account to conduct official government business during his first months at the Pentagon, according to a New York Times report on Wednesday.

Citing White House and Defense Department officials and copies the emails, the newspaper found Carter continued using his account, which violates Defense Department rules, for at least two months after the scandal erupted in March over Hillary Clinton’s use of her personal email while she was secretary of state.

A spokesman for Carter told the Times that the Pentagon chief felt it was a mistake to use his personal account for government business and has since stopped the practice. It was unclear how many work-related emails Carter sent and received from his personal email account. Read more at the New York Times.