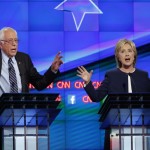 A new poll shows Hillary Clinton recouping some of the numbers she lost over the summer to Bernie Sanders in New Hampshire.

A Suffolk University/Boston Globe poll of 500 likely Democratic voters after this week’s debate put Clinton at 37 percent and Sanders at 35 percent.

Vice President Joe Biden, who has not announced if he will be a candidate, got 11 percent of the vote. Read more at The Boston Globe.