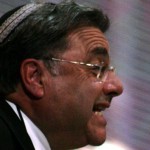 “They should say ‘nostra maxima culpa’—in plain Hebrew, chatanu—for rushing in where angels fear to tread.”

The Center for Jewish-Christian Understanding and Cooperation (CJCUC), under the direction of Rabbi Shlomo Riskin, has published a new “historic” document which directly challenges the traditional Jewish approach to interfaith relations with the Christian world.

The “Orthodox Rabbinic Statement on Christianity” is neither normatively Orthodox, nor rabbinic, but it certainly feels ecumenical. Tragically, it reads like the ultimate “anti-Rav” document—in irreverent defiance of the widely accepted directives on interfaith conduct formulated by Rabbi Riskin’s own mentor, Rav Joseph B. Soloveitchik, zt’l.

Couched in servile terminology and themes of brotherhood and commonality, this document is nothing short of a direct confrontation between the lonely man of faith and the man who can’t tolerate being alone—regardless of the cost. A virtual spiritual standoff between the majestic man, who maintained with dignity carefully drawn theological boundaries between faiths, versus the man who presents missionaries in synagogues and public forums—proclaiming “we are not alone.” Rabbi Riskin’s response to those who want to lovingly usurp our heritage in a Hebraic-Christian embrace is, “If they love us too much, we should accept it as a gift.”

For years, Rabbi Riskin has been boasting about a “sea change” in the Christian world. This is nothing less than delusional thinking on his part and on the part of the other signatories of the document, as the facts on the ground reveal a disturbing reality. That such conciliatory gestures are being offered up in a time where mainline churches—across denominations—are driving the divestment movement and have all but declared war against Israel is unthinkable. Consider the following:

•    Evangelical leaders are expressing alarm as many mainline churches are coming out against Israel with what’s been termed the “the new anti-Semitism against the Jews” and a “mounting anti-Israel crusade.” Most divestment/BDS campaigns against Israel are being driven and spearheaded by Christian groups. And our very best Christian friends are admitting that Replacement Theology is alive and well. Pro-Israel Christian advocates openly concede that the anti-Israel atmosphere has become pervasive in many evangelical churches.

•    In recent years, the Israeli government has sponsored solidarity missions for evangelical church leadership, only to have those Christian “friends” stand in Judaism’s holiest places to publicly declare that the time has come to convert the Jews.

•    Christian and Jewish Israel advocacy groups are scrambling to launch campaigns in a desperate attempt to try and stem and repair the damage being done to the Israel-evangelical relationship, as support from Christian friends erodes.

While referencing the Second Vatican Council and the 50th anniversary of Nostra Aetate as an inspiration for this ecumenical document, it should be understood that this is not a document singling out relations with the Catholic church; rather, the signatories are using the 1965 Catholic declaration as a tool to promote an inclusive acceptance of “the hand offered to us by our Christian brothers and sisters.”

Despite the dismal and deteriorating situation currently existing in Israel-church relations, Rabbi Riskin continues to publicly pin his hopes on a union against jihadism formed between “thirteen million Jews and two billion Christians,” citing the “miracle” of “we are no longer the minority.” Contrary to Rabbi Riskin’s desires, it should be noted that every Jewish schoolchild is proud to proclaim that “the miracle” we Jews have celebrated throughout the centuries has been the repeated victories of “the few against the many.” It is a tragic irony that a theological document that paves the way for Jewish assimilation with Christianity has been introduced by “Orthodox” rabbis during the festival of Hanukkah.

Equally tragic and ironic is the astounding revisionist history being introduced in the name of Rav Soloveitchik, who repeatedly rejected the ecumenical overtures of the Catholic Church before, during, and long after Nostra Aetate. The Rav’s celebrated essay “Confrontation” was written with the intention of preserving the uniqueness of the Jewish faith in a time of change in the Christian world, in order to ensure that there would not be a breakdown of the boundaries between faith communities via prohibited interfaith theologically based engagements.

And yet in a direct affront to what Rav Soloveitchik instructed, Shlomo Riskin claims that “Confrontation” inspired and laid the ideological groundwork which led to the eventual establishment of his Orthodox Jewish-Christian theological center, CJCUC, in 2008, and that those guidelines drawn up by the Rav not only permitted such theological encounters but also rendered them necessary.

In addition to specifically outlining problematic topics for theological discussion—all of which appear to be a part of the CJCUC curriculum—Rav Soloveitchik expressed the following concerns about the interfaith approach which now seems to characterize the new so-called Orthodox Rabbinic Statement on Christianity:

•    The Rav wrote in “Confrontation” that people confuse two concepts when they speak of a common tradition uniting two faith communities such as the Christian and the Judaic.

•    The Rav considered it “a betrayal of our faith and heritage” to “even hint to another faith community that we are mentally ready to revise historical attitudes, to trade favors pertaining to fundamental matters of faith, and to reconcile ‘some’ differences.” The Rav warned against displaying “a servile attitude.”

•    The Rav emphasized in “Confrontation” that, in order for us as Jews to “safeguard our individuality and freedom of action,” we must make it very clear that the Jewish Nation is not related to any other faith community as “brethren” even though “separated.”

•    The Rav was disturbed by the “naïve and equivocal” statements coming from Jewish leadership in their reckless attempts at dialogue and by “rushing in where angels fear to tread.” He reproached Jewish leaders in the strongest of language for having “transcended the bounds of historical responsibility and decency by asking for a theological document on the Jews as ‘brethren’ in faith instead of urging the Church to issue a strong declaration in sociological human terms affirming the inalienable rights of the Jew as a human being.”

Throughout Jewish history, our sages and scholars, whether in the golden ages of philo-Semitism or the dark ages of anti-Semitism, painstakingly pored over our sources and had the experience, wisdom, and foresight to come to a remarkably consistent and timeless understanding of how Jews are to conduct themselves with dignity among the nations, without compromising their heritage and very soul.

Yet now we have a document that appears to be the result of a frenzied and extemporaneous “Google search” to grasp at a hodgepodge of sources in order to find quotes from eminent Jewish scholars and sages to fit an agenda—an agenda which raises Jesus to new heights and places Christianity on par with Judaism.

Rav Samson Raphael Hirsch is used and abused in the CJCUC statement. This is particularly shameful in that it was Rabbi Hirsch who rejected the concept of shituf outright and who described the “tragedy of our days” as being that the terms “religion” and “theology” have been applied to Judaism and Torah.

Today we can see how convoluted CJCUC’s concept of Jewish scholarship is, with Orthodox Jew David Nekrutman, the executive director of CJCUC, studying theology and admittedly getting his inspiration from Oral Roberts University. ORU is a Christian institution which still teaches Replacement Theology, engages in efforts to evangelize Jews, and is involved in anti-Israel campaigns. A recent Facebook message by Nekrutman gives us a startling indication of the great depths to which CJCUC and their document is taking us all:

“Trying to complete my paper on the Parable of the Sower (Matthew’s version) through a Jewish exegesis of Isaiah 6. My brain is exploding.”

In my capacity as rabbinic director of JewishIsrael, I instructed the staff members not to involve themselves in Rabbi Riskin’s tenure brouhaha with the Chief Rabbinate last spring. This was an especially difficult decision for JewishIsrael because it was David Nekrutman, Rabbi Riskin’s right-hand man, who issued an e-mail and Facebook bulletin at the end of May placing “building bridge efforts with Christians” at the top of the list of reasons for the Chief Rabbinate’s deliberation over Rabbi Riskin’s continued tenure. Yet in spite of this, the press all but ignored this hot-button issue of Rabbi Riskin’s radical theological ventures with the Christian world.

Rabbi Riskin should have been intelligently and directly confronted years ago by those charged with upholding Jewish tradition and halachah.

His reckless theological exploration with Christianity must stop.

JewishIsrael believes that it is incumbent upon every Jew who cares about the integrity, survival, and very essence of Judaism to honestly investigate the consequences of Israel’s theologically charged relationship with the Christian world at this time.

In closing I will end with a telling, if not prophetic, excerpt from the eulogy for Rav Jospeh B. Soloveitchik zt’l, delivered by Rabbi Dr. Norman Lamm:

“We must guard, therefore, against any revisionism, any attempts to misinterpret the Rav’s work in both worlds, akin to the distortion that has been perpetrated on the ideas of R’ Samson Raphael Hirsch. The Rav was not a lamdan who happened to have and use a smattering of general culture, and he was certainly not a philosopher who happened to be a talmid chacham, a Torah scholar. He was who he was, and he was not a simple man. We must accept him on his terms, as a highly complicated, profound, and broad-minded personality, and we must be thankful for him. Certain burgeoning revisionisms may well attempt to disguise and distort the Rav’s uniqueness by trivializing one or the other aspect of his rich personality and work, but they must be confronted at once. When the late R. Yechezkel Abramski eulogized R’ Chayim Brisker, he quoted the Talmudic eulogy, ‘If a fire has blazed up among the cedars, what shall the hyssop do,’ and interpreted that as: after the giants have been taken from us, who knows what the dwarfs who follow them will do to their teachings.”