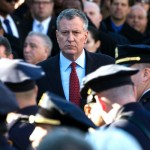 New York City Mayor Bill de Blasio declined to apologize for any of his previous remarks at a press conference, despite pressure from police unions to do so in order to resolve a rift with the NYPD.

“I respect the question but the construct is about the past and I just don’t want to do that,” de Blasio said.

A recent Daily News editorial also implored the mayor to accept responsiblity for sparking the conflict. “I think we have to move forward,” he said in response.

De Blasio said though nothing was resolved in a meeting last week with police union leaders, he’s open to talking to them again. Read it at Capital New York.