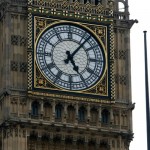 Sunday morning here in Israel, at 2 a.m., Daylight Saving Time ended and the clock was moved back one hour.

Before 1992, DST was governed by the Time Act, a law inherited by Israel from the British Mandate of Palestine. Summer Time was introduced in Israel between the years 1948-1957, but the length of Daylight Saving Time has changed significantly depending on the year. In 1951-1952, it was enacted for about seven months, whereas in the years 1953-1954 it was enacted for only three months. In 1958, daylight saving time was canceled. Due to the global energy crisis because of the aftermath of the Yom Kippur War, Summer Time was enacted again from 1974-1975.

The Chok Kvias Hazeman, or Law Determining the Time, is an Israeli law governing Israeli Daylight Saving Time. It was approved by the Knesset in 1992, replacing the British Mandate of Palestine time act inherited by Israel. The 1992 time zone law cancelled the Time Act, and stipulated that Daylight Saving Time will be operated for at least 150 days each year, and that the final dates will be decided by the minister of the Interior, subject to the approval of the Knesset committee for internal affairs.

Until 2005, the start and end of Daylight Saving Time each year was established in an ad hoc fashion as the result of haggling between political parties representing various sectors of Israeli society. Parties representing religious groups wanted the start delayed till afterPesach and the end to precede Yom Kippur, while the secular parties would argue for starting it earlier and ending it later. Thus, there was no established rule that could guarantee a predictable changeover in either direction.

Interestingly, in the past, the unpredictability of DST in Israel became frustrating enough that Microsoft Windows stopped trying to track changes and just made Israeli time be Greenwich Mean Time plus two hours (GMT+2) (and disabled the Daylight Saving Time option). This has led to various ad hoc solutions to the problem in Windows systems and other Microsoft software (e.g. Outlook calendar entries are often off by an hour when shared, due to the lack of DST support).