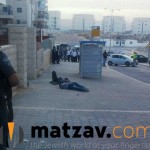 Residents of a city near Yerushalayim are living in fear for their safety, following a terrorist attack in one of its neighborhoods.

The attack took place in Ramat Beit Shemesh on Thursday morning. Due to the presence of a large number of illegal Palestinian workers, many of whom have been squatting in construction sites near pre-schools, residents of the area are extremely anxious.

Their anxiety is exacerbated by the absence of police in the neighborhood. According to NRG, its police station resembles a glorified outpost, in a dilapidated, abandoned building, and therefore cannot adequately service the neighborhood’s tens of thousands of residents.

Thursday’s terror attack was carried out by two Palestinians who initially attempted to board a school bus, but were repelled by the driver. They then continued down the street, where they stabbed an 18-year-old man outside the Kol Yehuda shul.

They were later shot by security forces at a nearby bus stop.

The terrorists were 20-year-olds from the West Bank village of Surif, near Chevron. Both were found wearing t-shirts with the logo of the Izzedine Al-Qassam Brigades, Hamas’ military wing.

Kahane told NRG that he personally called the police multiple times to alert them to the terrorists as they attempted to board the school bus, but with no response.

Another resident, a local Yeshiva student identified only as “Shin,” said he crossed paths with the terrorists twice that day, and that he was still terrified. “I don’t understand how I’m still alive. I was right near the angel of death,” he said.

“It’s scary here.” he said. “The illegal [Palestinian] workers sleep in [partially constructed] buildings [near where] I send my daughters to the grocery store. My daughters and other young children shop while surrounded by illegal workers.”

“There’s no feeling of security here,” said Shin. “Everything is in chaos.”