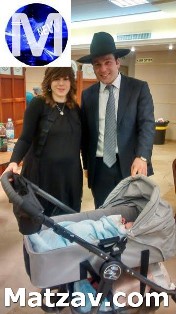 It was business as usual at the Bnei Torah shul in Har Nof this morning following the devastating Palestinian terror attack that took the lives of four Yidden and a Druze policeman. Shacharis was full and men were engaged in limud haTorah as security guards and border police milled around the area.

The community of Har Nof community is still reeling.

“We are in shock,” said Brachi, 19, a local resident of Har Nof. “I live down the street from the shul and it was horrifying to wake up yesterday and hear the attack.”

“The men who were murdered didn’t do anything bad – they were just davening to Hashem,” she said. “It’s so difficult to understand. I couldn’t wait for yesterday to end and to see the sun rise again today – just to be able to start over.”

But even with the cloud of sadness that descended on the Har Nof neighborhood, as the community mourned the gruesome murders and the bloodied shul, there was a spark of happiness felt – in the shul itself.

Dov and Shula Sorotzkin, residents of Har Nof, decided to hold the bris of their son, Eliyahu Meir, at the Kehillas Bnei Torah shul where the attack took place 24 hours earlier.

“We woke up yesterday to the sounds of gunfire,” Dov said.

The couple, who live right next to the shul, decided that the shul was the best place to perform the bris milah of their newborn son.

“We chose to do the bris here today because of the symbolism that this place holds, especially in light of this important event. Bris milah is about the covenant and connection between Hakadosh Boruch Hu and the Jewish people,” Dov said.

“The rabbonim who were here yesterday were killed in the middle of a conversation with Hashem, but we are here today, continuing that connection,” said Dov.

Dov, the youngest in a family of nine children, named his son Eliyahu Meir after his great-grandfather, Rav Eliyahu Meir Bloch zt”l, the Telsher rosh yeshiva. .

For Dov’s father, Reb Yosef Sorotzkin, the bris milah of his ainikel is a sign of emunah. “We are doing what the Jewish people have done throughout history. Every time there has been death and destruction, we keep moving and creating,” he said.