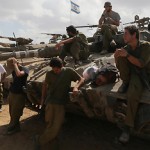 Israeli Prime Minister Benjamin Netanyahu told his cabinet ministers late Monday night that he had agreed to a three-day ceasefire with Hamas starting at 8 am Tuesday morning.

On the opposing side, Hamas’ spokesperson announced just after midnight that the organization had also decided to accept the initiative which stipulates that further discussions will take place in Cairo to try and reach a permanent agreement.

Al Arabiya reported earlier Monday night that Israel told US Secretary of State John Kerry that it “was prepared to withdraw from the Gaza Strip unconditionally if there is a lull.”

The sources emphasized that Israel remains “prepared for the possibility that the ceasefire would be broken.” They called on Israelis to maintain vigilance, “given the attempts to launch attacks before the ceasefire comes into effect.”