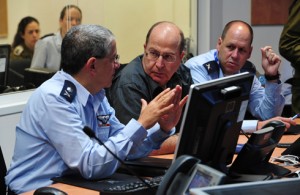 Operation ‘Protective Edge’ is currently at a point where it is unclear if it will stop completely or if it will be broadened to further areas in Gaza. The IDF is demanding Israel’s political leadership reach a decision regarding the next steps of the ground offensive in the Gaza Strip. A high ranking military official spoke Tuesday with journalists about the next stages of the operation and said that “the political leadership must decided now – either we push deeper (into Gaza) or we backtrack.” In the meantime, IDF have become more static, a dangerous situation for forces facing guerrilla fighters. Israel is continuing its massive strikes against terror targets in Gaza, as rockets continued to hit Israeli civilian targets last night and early this morning.

For the second time in 24 hours the IDF dropped warning flyers over the Gaza areas of Al-Jarara, Bnei-Sahila, Abasan al-Kabira & Khirbat Ikhza’ah, an indication of a possible broadening of the operation.

Rocket warning sirens were heard in communities in the Sderot and Netivot regions, east of the Gaza Strip early this morning. The early morning attack came after a fairly quiet night, with no reports of rockets between midnight and 5 a.m. before then two rockets fired from Gaza last night hit southern Israel. In addition, the Iron Dome intercepted one rocket over the Tel Aviv area and one rocket in the Jerusalem area.

There are incessant reports of a possible ceasefire, lasting for various durations, based on varying parameters, brokered by the US or Egypt. It depends on who you ask.

Meanwhile, Hamas’s military chief Muhammad Deif, in a recording, has declared that Hamas will prevail because its fighters “are eager for death” while Israel’s are eager for life. The only way to reach a ceasefire in Gaza is for Israel to end its “siege” on Gaza, he declared .The tape marks the first time he’s been heard from since 2012 Operation Pillar of Defense. Reports last week said that an Israeli airstrike in Gaza had targeted Deif’s home.

Despite the continues heavy fighting an IDF spokesperson announced that IDF officers transferred Palestinian patients through the Erez Crossing for further medical treatment late last night. On July 28th a young Palestinian child suffering from cancer was treated at the IDF field hospital run by its COGAT unit. The doctors sent him for further care in Israel. Since the field hospital opened on July 20th, doctors and staff have attended to over 40 patients. Some have been treated and released, some treated and sent on for additional care at a hospital, and some sent immediately for hospital care. Hamas has directly and indirectly prevented patients from arriving for care at the field hospital and has even shelled the hospital.
As rockets were fired at Jerusalem tens of Arab rioters clashed again with police in East Jerusalem. They threw rocks and fired firecrackers at police, with police responding with crowd control means. One police officer was lightly wounded after being hit by a rock.

Since the beginning of Operation ‘Protective Edge’ 2,612 rockets have been fired from Gaza at Israel. 506 of them were intercepted by the Iron Dome system. 206 terror targets were hit last night, a total of some 3950 targets attacked by the IDF.

Leave a Reply to am Yisroel Chai Cancel reply