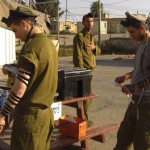 Israeli Prime Minister Bibi Netanyahu issued a statement at the Defense Ministry in Tel Aviv  sharing the grief of the families of IDF soldiers who have fallen in the war against Hamas and outlining Israel’s strategy to defeat Hamas. “There is no more just war than this one that our heroic sons are fighting. They have fallen in defense of the nation and we all mourn their passing,” he said.

According to media reports, a Hamas gunman tried to drag one of the soldier’s bodies back into the tunnel.

IDF soldiers spotted the terror squad from a lookout tower and fired at them, killing at least one gunman and thereby thwarting the attack as the remaining Hamas terrorists fled back to the tunnel, leaving behind their Kalashnikov rifles and anti-tank missiles.

The Palestinian Safa News Agency, reported that the military wing of Hamas stated that the conditions on-the-ground had not allowed the terror squad to complete its mission.

Gaza terrorists misfired rockets from civilian areas around 5 PM on Monday evening, hitting a hospital and refugee camp in the Gaza Strip instead of its intended target of Israeli civilians. Al-Shifa Hospital and the Al-Shati Refugee Camp were struck by failed Gaza rocket attacks.

According to the IDF, Israel hit 150 targets in the Gaza Strip overnight. The IDF targeted two concealed rocket launchers and a weapon manufacturing site in the northern and central Gaza Strip. The home of Hamas leader and millionaire, Ismail Haniyeh was also hit yesterday as were Hamas satellite television and radio stations.

Rocket sirens were heard through Israel on Monday night including Tel Aviv and the metropolitan areas.  One rocket fell near an open area near Rishon Letzion, while another was intercepted over Ashdod. On Tuesday morning, rocket alerts were sounded in Israeli communities on the Gaza border and a mortar rocket fell in the Eshkol Regional Council, causing no damages.

“Hamas has violated every ceasefire proposal. We face a cruel enemy whose brutality is directed not only against us, against our civilians, but is also directed against his own civilians. It exploits their civilians in order for there to be more and more victims even as they send fire and death toward us.”