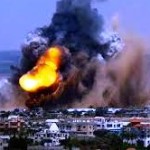 Hamas on its part has rejected the ceasefire extension by Israel, stating it is a unilateral decision on Israel’s part, and demanding Israeli troops withdraw first. Meanwhile, a Saturday morning report in Asharq Al-Awsat suggested that Hamas may be inclined to accept Kerry’s week-long ceasefire proposal, out of the desire to allow the people of Gaza to rest during the end of Ramadan, the Eid al-Fitr.

IDF forces remain in Gaza to continue their work to dismantle terror tunnels. The result from Saturday’s operations was that the IDF unearthed four new tunnels. Each tunnel is mapped out, and specialized forces are learning in the process how to efficiently neutralize these threats. Hundreds of terrorist weapons were found in homes, schools, mosques and hospitals throughout Gaza

Cpt. Liad Lavi, 22 and Chief Warrant Officer Rami Chalon, 39, both injured in battle, died of their wounds Saturday. In total, 43 IDF soldiers have been killed in the fighting during the operation.

Since midnight, three rockets fired from Gaza hit southern Israel. Over the weekend, more than 22 rockets were fired from Gaza towards Israel. At least 16 rockets hit Israel. 6 rockets were intercepted by the Iron Dome missile defense system. The IDF struck over 40 terror targets in the Gaza Strip.

Since the start of Operation ‘Protective Edge’, more than 2450 rockets and mortars were fired at Israel. The IDF has targeted over 3,747 terror targets with ground, naval and aerial capabilities, including 31 tunnels.