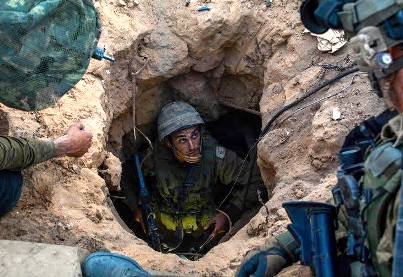 The IDF has reportedly stabilized its lines and is now focusing on mapping out and destroying the terror tunnels they have uncovered. So far, 31 tunnels have been uncovered and nine have been destroyed. IDF-Hamas fighting in Gaza remains intensive, as Hamas is still trying to carry out attacks in Israel through tunnels. A major tunnel was uncovered yesterday, contained maps, IDF uniforms and weaponry for an imminent attack. In one incident, a Combat Engineers unit spotted terrorists emerging from a tunnel. They called in air support and the cell was hit. Over the past 24 hours IDF ground forces have arrested 150 terrorist in the Gaza Strip, including one dressed in an IDF uniform. Over 200 terrorists were killed since the beginning of the ground operation. Overnight, the IDF attacked 35 terror targets, bringing the total to some 3,400 terror objective targeted by the IDF.

Lt. Paz Elyahu, 22, Staff Sgt. Li Mat, 19 and Staff Sgt. Shahar Dauber, 20, all paratroopers, were killed yesterday on the battlefield by an explosive device. 32 soldiers have fallen during Operation ‘Protective Edge’.
UN Secretary General Ban Ki-Moon and US Secretary of State John Kerry are continuing their shuttle diplomacy, but to no apparent avail. Reports indicate they have not been able to contact Hamas in any fashion; not through Egypt or PA Head Abbas. The IDF is interested in continuing to destroy as much as Hamas’ terror infrastructure as they can, and as PM Netanyahu pointed out to Secretary Ki-Moon: “We accepted the Egyptian ceasefire proposal. I don’t need to remind you it was a proposal that was supported by the UN, by the Arab League, by the United States, by Europe. Hamas rejected it. We accepted the humanitarian ceasefire proposal that the UN proposed afterward. Hamas rejected that. We accepted the ceasefire proposal of the Red Cross in Shejaia. Hamas rejected that, twice.” Hamas, however, seems to be bent on total destruction of the Gaza Strip. Presenting ridiculous demands as a prerequisite to a cease fire, such as Hamas leader Khaled Mashaal’s rejection of a ceasefire unless the blockade of Gaza is lifted, Hamas shows no interest in relenting. With the realization that their rockets have been rendered ineffective because of the Iron Dome systems, and that they have lost their strategic weapon, the terror tunnels, it seems they have adopted an ‘I’ve-got-nothing-to-lose’ approach to the fighting.

98 rockets were fired at Israel yesterday, 25 were intercepted by Iron Dome. A foreign worker was killed by a rocket yesterday while he was working in a field. With this, the IDF announced yesterday that they have destroyed 30-40% of Hamas’ rockets since the starting of the operation. In total, 2270 rockets were launched toward Israel since the beginning of the operation. The Iron Dome has destroyed 448 of them.