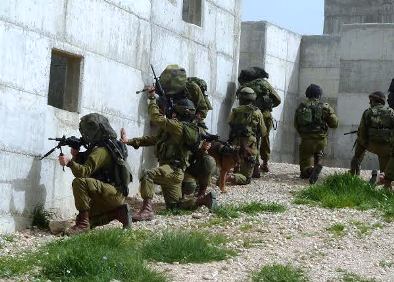 The IDF is continuing its mission to destroy Hamas’ terror infrastructure. Some 200 terror targets were attacked yesterday, 1833 since the beginning of the ground operation.

Hamas continues to use civilian buildings as fortifications. Rockets were fired at tanks yesterday from a mosque in Khan-Yunis. Staff Sgt. Evyatar Turegeman was killed from these rockets. Only after making a clear identification of the source did the IAF retaliate. Later on, more anti-tank rockets were fired in Khan-Yunis. Four terrorists were killed in that battle. A massive weapons cache was exposed by a Special Forces unit in the center of the Strip. The cache included heavy machine guns and anti-tank rockets. IDF Spokesman Motti Almoz announced this morning that the IDF has gained control of most the terror tunnels in Gaza. 28 attack tunnels have been exposed so far.

Two IDF soldiers were killed last night on the battlefield. Capt. Dmitri Levitas, 26, of the Armored Corps, was shot by a sniper. First Lieutenant Natan Cohen, 23, also of the Armored Corps also died in combat. 29 soldiers have fallen during Operation ‘Protective Edge’.

A situational assessment took place yesterday as part of Operation ‘Protective Edge’ with President Shimon Peres, Defense Minister Moshe Ya’alon, IDF Chief-of-Staff Lt.-Gen. Benny Gantz and the members of General Staff. As part of the assessment President Peres was briefed by GOC Intelligence Maj-Gen. Aviv Kochavi, GOC Southern Command Maj.-Gen. Sammy Turgeman and GOC Operations Maj.-Gen. Yoav Har-Even.
Chief-of-Staff Lt.-Gen. Gantz stated that, “This is an operation which proves our combined work; every person sitting around this table is a full partner to this ongoing battle. We are pained by the losses but have no doubt that we are in the right direction to achieve the objectives set by the political leadership and we are committed to continuing in our mission to bring quiet and security to the citizens of Israel.” Gantz saluted President Peres for his role in establishing Israel’s security apparatus.
Defense Minister Ya’alon added, “The soldiers and officers who we are meeting are professional and committed. Our forces are fighting an enemy which disappears between civilians.”

Following the briefing President Peres said, “Supporting the bereaved families at this time gives me strength. We are meeting a young generation, unfortunately after they fell in battle, and learning how wonderful they are. I don’t remember a period of such solidarity between citizens and soldiers, between soldiers and parents. This is our victory of humanity. I am concluding my service but beginning my reserve duty. From my experience I can say that I don’t recall a military command that instilled such faith in the people. I leave here with great pride. As a citizen of Israel I thank you from the depths of my heart.”

Depite the heavy fighting and continued terror attacks Israel continued to provide the Gaza Strip with the supplies and the field hospital established for them is still running. 57 trucks entered Gaza yesterday, carrying 216,000 liters of petrol and 44 tons of gas. In total, 778 provision trucks have entered Gaza since the beginning of the operation.

For the second time in less than a week, UNRWA has said that it found rockets in one of its schools in Gaza. “UNRWA strongly and unequivocally condemns the group or groups responsible for this flagrant violation of the inviolability of its premises under international law,” the agency stated. UNRWA claims it will launch a comprehensive investigation into the circumstances surrounding this incident.

Over the past 24 hours 90 rockets were fired at Israel form Gaza, including at the Tel Aviv area, where people were wounded. One of hit an empty kindergarten in southern Israel.18 of the rockets were intercepted by the Iron Dome anti-rocket system. The Iron Dome shot down its 1000th rocket yesterday.

Since the start of Operation Protective Edge, over 2160 rockets and mortars were fired at Israel. Of them 1,700 hit Israel and 420 were intercepted by the Iron Dome missile defense system. The IDF has targeted over 2,969 terror targets with ground, naval and aerial capabilities.