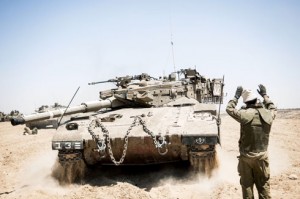 IDF forces continue to move slowly through the Gazan neighborhoods of Shuja’iya, Jabalya and Beit Lahiya, searching for terror tunnels, weapons caches and terrorist command and control centers. The fighting is fierce and intense, as Hamas, which has dug these tunnels at great cost, does not want to lose this strategic weapon which enables then to launch coordinated attacks within Israel. The IDF is determined to destroy as much tunnels as possible, eliminating this eminent threat to the citizens of Israel.  23 terror tunnels have been uncovered by IDF forces since July 17th.

The close-courters fighting has exacted a heavy toll from the IDF’s soldiers, and 27 soldiers have fallen during Operation ‘Protective Edge’. 186 terrorists have been killed in the fighting, 20 over the past night. In total, 23 have been arrested and taken to Israel for questioning.

Speaking to Sky Arabic, Fox and NBC last night, PM Benyamin Netanyahu said: “They [Hamas] have taken billions of dollars. Instead of building kindergartens with it, they’re building tunnels, concrete tunnels to blow up our kindergartens. I can tell you that we opened up a hospital, a field hospital, a humanitarian field hospital on the edge of Gaza and Hamas doesn’t let the people come there. They’re hiding rockets in hospitals; they’re hiding arms in hospitals; they’re shooting from hospitals. So they just don’t care. I agreed now to three different calls for ceasefires. We kept them even though Hamas kept firing and they violated every one of those ceasefire calls: the Egyptian ceasefire, the UN ceasefire, the Red Cross ceasefire. We kept them, they broke them. The goal is to restore quiet and security for the people of Israel for a significant period of time and we’ll take whatever action is necessary to achieve that goal.” Reports of another long-term humanitarian cease fire are coming from Arab sources, but Israel has not confirmed the reports.

On tother fronts in Israel, the IDF intercepted in a shipment of weapons in the Dead Sea, which was sent from unknown operatives in Jordan to Palestinian terrorists, a military source said.

At about 3AM, a Palestinian terrorist shot and severely injured a 25 years-old Israeli civilian in Judea and Samaria. IDF Forces searched the area.

Four rockets were fired from Gaza over night towards Be’er Sheva. One was intercepted by Iron Dome and three hit open areas. Earlier in the evening, a rocket fired from Gaza hit an open area near Kafr Qasim in central Israel, nearly 100 km from Gaza.

In the past 24 hours more than 139 rockets were fired from Gaza towards Israel. At least 116 rockets hit Israel. 17 rockets were intercepted by the Iron Dome missile defense system. The IDF struck 150 terror targets in the Gaza Strip.

Since the start of Operation Protective Edge, over 2040 rockets and mortars were fired at Israel. Of them 1,570 hit Israel and 396 were intercepted by the Iron Dome missile defense system. The IDF has targeted over 2,924 terror targets with ground, naval and aerial capabilities