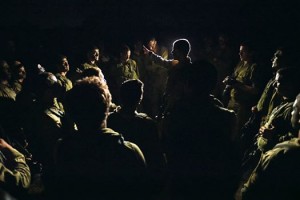 The IDF is continuing to broaden its ground operation in the Gaza Strip. Its current primary objective is to seek and destroy tunnels used by Hamas terrorists. Ground forces, armor, artillery and Special Forces are participating in the action. Reports indicate that the forces are meeting formable opposition by Hamas. Hamas invests months and even years in digging these terror tunnels, and therefore are doing all they can to thwart the IDF’s efforts to seek and destroy them. The operation is executed slowly and with surgical precision as Hamas has booby-trapped the tunnels, forcing the troops to work slowly and at times in open areas in Gaza, leaving them exposed to sniper and anti-tank fire.

Over 70 terrorists have been killed in battles with the IDF. In one incident yesterday a terrorist burst out of a tunnel and attacked a paratrooper unit; he was killed in the gun fight. Hamas has further resorted to suicide attacks, using animals as well as carries of the deadly charges. 21 terrorists were arrested and taken for further questioning.

The incursion and close-courters fighting is exacting its toll. Early Friday morning, First Sgt. Eitan Barak, 20, was killed during the entry into Gaza. Yesterday, Sgt. Adar Barsano, 20, and Maj. (res.) Amotz Greenberg, 45, were killed by Hamas terrorists who infiltrated into Israel. They were killed as a group of Hamas terrorists infiltrated Israel through a tunnel from Gaza and attempted to carry out a massacre in an Israeli community near the border. The IDF thwarted the attack. One of the infiltrators was killed; the others escaped to Gaza. Two IDF soldiers were wounded in the attack. The terror cell was wearing IDF uniforms and carrying with them sedatives and binding equipment, evidence of their ongoing efforts to abduct Israeli civilians.

Early this morning Second Lieutenant Bar Rahav, of the combat Engineers, aged 21, was killed by an anti-tank missile that hit the vehicle he was riding. Sergeant Benaya Rubel, a paratrooper, aged 20, was killed in clashes in the Gaza Strip. An IDF officer was seriously injured in this incident.

Since last night two IDF soldiers have been seriously injured, one was moderately wounded and another two were lightly wounded.

Rockets continue to rain down on civilian targets in Israel, albeit in a lessened intensity and frequency. However, Hamas still has the ability to fire on Israel’s main cities, including Be’er Sheva and Tel Aviv, and have done so this morning. An Israeli Bedouin was killed over the weekend by a rocket and four members of his family were wounded, including a three month old baby who is in critical condition. The Israeli military said Hamas terrorists have fired at least 1,705 rockets out of an estimated stockpile of about 10,000, a depletion of about 17 percent.