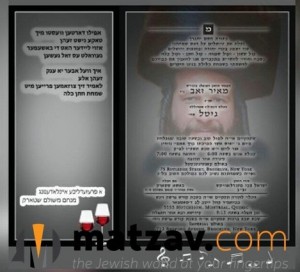 Last night, the wedding of Gitty Stark, a daughter of Reb Menachem Stark z”l, the beloved members of the Williamsburg, NY, community who was murdered two yearsago and whose passing shocked the Jewish world, was held at the Continental Hall in Williamsburg, Brooklyn.

The chosson is Volvy (Meir Zev) Mendlowitz of Montreal, Canada.

Reb Menachem’s death was initially shrouded in mystery. After leaving his real-estate ¬office on Rutledge Street in Williamsburg, Reb Menachem was accosted by two suspects who wrestled him into a minivan. The next day, Reb Menachem’s body was discovered partially burned in a dumpster at a Long Island gas station.

Reb Menachem is survived by his wife, Mrs. Bashie Stark, and their seven children, five sons and two daughters.

Gitty, the oldest of Reb Menachem’s children, was engaged since last April.

Music at the wedding was performed by a band led by Yanky Briskman on keyboard, with singer Levi Falkowitz, and the Shirah Choir.

The mesader kiddushin was the Satmar Rebbe.

Watch a video clip from the wedding: