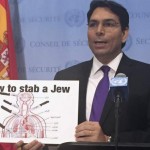 After two months in office, Israel’s ambassador to the UN Danny Danon has learned there is “a public UN and a quiet UN. During the day, I have many meetings with ambassadors and officials and quietly you see that there is a lot of appreciation, I would even say admiration, for Israel.”

However, publicly, the UN exhibits a strong anti-Israel bias.

“We are fighting against hundreds of people who wake up in the morning and think: What can we do to bash Israel at the UN? The strong democracies are not in charge in the UN and there is a majority of small countries, most of them are not democratic, who have the control,” he added.