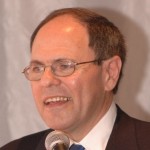 Dani Dayan is insisting that he has no plans to withdraw from his appointment as Israel’s ambassador to Brazil, despite the Brazilian government’s reluctance to approve him over his former role as a leader of the Israeli settlement movement in Judea and Samaria.

Dayan met last week with Prime Minister Benjamin Netanyahu and Deputy Foreign Minister Tzipi Hotovely to discuss Brazil’s unwillingness to approve him as ambassador, saying he would not step down from the role. Both Netanyahu and Hotovely offered their full support. A senior Israeli Foreign Ministry official on Monday denied reports that the ministry believes Dayan should give up the ambassadorship.

Meanwhile, Dayan accused Member of Knesset Tzipi Livni (Zionist Union) of trying to thwart his appointment, writing Monday on Twitter, “14 MKs worked tirelessly against my appointment in Brazil: 13 belonging to the Joint Arab List and then Tzipi Livni.”

Dayan explained that he was referring to a series of interviews Livni has given on the matter. In response, Livni said, “I did not work against the appointment. I am in favor of worthy, talented ambassadors who represent the government—and you (Dayan])certainly fit that criteria….The thing causing damage to Israel is not your appointment, but the government’s policies [on settlements]. But you shouldn’t have to pay the price for that.”