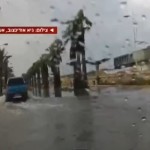 Stormy weather has created electricity problems in Israel from Netanya to Beer Sheva. Hundreds of thousands were left without electricity since the morning and the problem is expected to continue until tomorrow morning.

The electricity companies stated that they are “dealing with the difficult damage since the morning that was caused to the electricity because of the strong winds, rains, lightning and the collapse of trees across the country that caused the tearing of electricity cables and the cessation of electricity.”

The electricity companies added that most of the damage was caused in Netanya, Ashdod, Petach Tikva, Ra’anana, Chadera, Kfar Saba, Rechovot, Rishon LeTzion, and Tel Aviv.

One of the regions that absorbed the most damage was the Sharon region, where many trees collapsed across the city and there was no electricity on a number of streets.