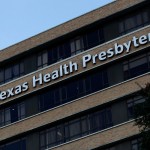 The Ebola patient being treated at a Dallas hospital was sent home with antibiotics for two days after he first went to seek care last week. “He was evaluated for his illness,” the hospital said, “which was very nondescript. He had some laboratory tests, which were not very impressive, and he was dismissed with some antibiotics.” During this period he was contagious. Two days later he returned and was placed in an isolation unit.

Unfortunately, the man will not be treated with the experimental drug ZMapp, as supplies of the drug have run out. ZMapp is one of the drugs rushed out of trials for use in the epidemic, and was famously used on two American mission workers. The patient has now worsened from critical to “in serious condition.” Read more at The Guardian.