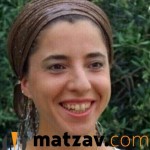 The levayah of Dafna Meir Hy”d, murdered on Sunday in the southern West Bank settlement of Otniel, took place this morning.

The levaya of the mother of six, two of them foster children, began at Otniel and made its way to kevurah on Har Hamenuchos in Yerushalayi,

As friends and family spoke about her courage in fighting off the attacker who entered her home, or her generosity as a mother of four children aged 11 to 17 and foster mother to two more under the age of 5, her own words in the weeks leading up to her death reveal a premonition of a family tragedy in the current wave of terror attacks.

In November, after the murders of Yaakov Litman and his son Netanel near Otniel, Meir shared her fears in a local news website, writing: “I have been thinking a great deal lately, thinking about why, what should be done or shouldn’t be or can’t be, how to behave, especially on the road, but not only. The fears, for my husband and children, my friends and family. The situation isn’t easy. I sometimes have a feeling of [being in a game of] Russian roulette. And I can’t sleep.”

“There is a lot of sadness in my work. I have a hard time falling asleep after shifts. I wander around dazed in the house for at least two hours.”

And, she said, she feared for emergency medical crews from Otniel who rush out to help those who are hurt nearby.

“Maybe there are traps” waiting for the rescue teams, she worries. “It’s frightening! And when they go out, in the first minutes before they arrive, maybe they have time to think, ‘Who will I meet this time? Maybe a neighbor, a friend, a wife?’ That’s the horrible reality.”

On Sunday, with three of her children in the house, Dafna wrestled with the attacker before being stabbed and left for dead as the attacker fled.

Media reports said her teenage daughter witnessed the attack and described the terrorist to authorities.

Dafna’s neighbor, right-wing activist Yehuda Glick, suggested the terrorist likely would have attacked the children if not for Meir fighting him off.

“The terrorist tried without a doubt to hurt the kids and Dafna, who was so small and short, fought him,” he told the Walla news site. “We are broken but strong.”

Security forces continue to search for the suspected Palestinian terrorist in villages near Otniel.

Residents of Otniel were initially told to stay home as authorities feared the terrorist was still in the village, but the manhunt has since focused on nearby Palestinian villages.

Initial inquiries suggest the attacker may have been a Palestinian employed in Otniel, authorities said. Trackers found his escape path, but no evidence of his entry into the village, suggesting he had entered through the front gate.

The suspicion has led local authorities to cancel all work Monday for Palestinians in Israeli settlements in the area.