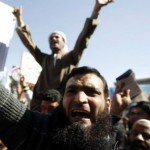 The Islamic State terror group group released a new video this week focusing on the wave of Palestinian terrorism in Israel and tensions surrounding Al-Aqsa mosque in Yerushalayim, urging a more “aggressive jihad against the Jews.”

“Fight the Jews any way you can. Terrorize them with explosive devices, tear them to shreds. Cut off the Jews’ heads,” an Islamic State operative asserts in the video.

The six-minute video features several scenes where terrorist attacks have taken place over the past few weeks, offers a short history of the Al-Aqsa mosque, and claims the compound is under Jewish “occupation” and that Arab leaders are “not doing enough to liberate” the mosque.

The video also features various Islamic State operatives declaring they will soon arrive in Jerusalem to “help our Palestinian brothers slaughter the Jews.”

The Islamic State released a video making a direct threat to Israel in July, in which one of its top operatives in Syria vowed to “destroy Israel.” The video also delivered a threat to “uproot Hamas and all secular [Palestinian] factions.”