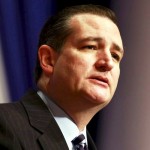 Ted Cruz said what had to be said. He showed the courage when everyone else has run the other way.

At the Republican Jewish Coalition meeting this morning in Washington, D.C., the Texas senator suggested the San Bernardino shootings were an instance of radical Islamic terrorism, the Daily Beast reports.

After RJC board member Edward Zucker introduced him as “the next president of the United States,” Cruz called for a moment of silence for the shooting victims.

“At this point, the details of what happened in San Bernardino are still unclear,” he began.

Then he suggested that the attack was terrorism and means we need “a wartime president.”

“All of us are deeply concerned that this is yet another manifestation of terrorism—radical Islamic terrorism here at home,” he said. “Coming on the wake of the terror attack in Paris, this horrific murder underscores that we are in a time of war. Whether or not the current administration realizes it or is wiling to acknowledge it, our enemies are at war with us. I believe this nation needs a wartime president to defend us.”

Officials don’t yet know the motives of the two attackers, both of whom died in a shootout with police. Their rampage left at least 14 dead and 17 wounded. At least one of the attackers, Syed Farook, was an American citizen. Some sites have highlighted his Muslim faith, including that he recently traveled to Saudi Arabia. Tashfeen Malik, the other attacker, was born in Pakistan and lived in Saudi Arabia before marrying Farook about two years ago and moving to the United States.