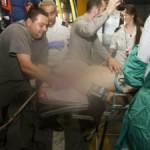 The Israeli soldier critically wounded in a stabbing attack at an intersection near the West Bank village of Beit Anoun on Monday regained consciousness on Wednesday morning after being in a medically induced coma.

Remarkably, he remembered many of the details of his brush with death, Israeli Channel 2 reported.

From his bed at the Shaare Zedek Medical Center in Jerusalem, Sgt. Gilad described being stabbed and – while bleeding profusely – shooting and killing his attacker.

Hospital staff told Channel 2 that what saved Gilad’s life was the emergency treatment he got from paramedics at the attack site, as well as the swift action of police, who cleared traffic for the ambulance to pass.

According to Channel 2, this was not the first time Gilad’s family has been summoned to the hospital under dire circumstances. Just over a year ago, Gilad’s brother was critically wounded during Operation Protective Edge in Gaza, but survived.

The terrorist who stabbed Gilad was later identified as Raed Jaradat. According to Palestinian Media Watch, Jaradat was honored late Monday on the official Facebook page of Fatah, the organization dominating the Palestinian Authority in Ramallah.

The post reads as follows: “The path of the struggle Palestinian National Liberation movement Fatah, North Hebron branch, escorts its Martyr (Shahid) son to his wedding, Raed Saket Abd Al-Rahman Jaradat who carried out the stabbing operation at the Bet Anoun Junction.”