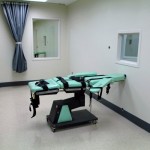 A U.S. federal appeals court on Thursday overturned a 2014 ruling that declared capital punishment in California was unconstitutional.

Last year, a federal judge ruled that delays in the state’s review process for the death penalty violated the Eighth Amendment ban on “cruel and unusual punishment.”

The three-judge panel for the Court of Appeals for the Ninth Circuit rejected that ruling as legally flawed and overturned it on procedural grounds. However, executions in California remain on hold due to separate legal challenges about whether lethal injections are constitutional. Read more at the Los Angeles Times.