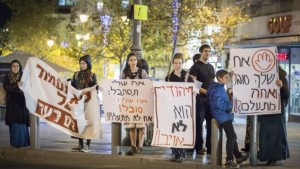 Lod District Court on Tuesday rejected a state appeal and granted house arrest to a Jewish terror suspect initially held in connection with a fatal firebombing in July, which killed three members of the same Palestinian family.

The appeal was filed after the state prosecution on Monday informed Petach Tikva Magistrate’s Court of its intention to indict the 18-year-old for a 2013 attack on an Arab shepherd, and not for the attack on the Dawabsha family home in the West Bank town of Duma.

Following the announcement, the court decided to free the suspect to house arrest, triggering the state appeal.

The 18-year-old is one of six Jewish terror suspects who appeared in court on Monday for a hearing on extending their remands. None of the six has been named due to a strict gag order imposed on the case.

Prosecutors said they would indict the youth for the attack on the Arab teen near a West Bank outpost two years ago. He had been held in administrative detention, without charges, for 30 days and was reportedly prevented from meeting with his attorney for 18 days.

The detainee’s father on Tuesday hailed the court decision.

“We are happy that justice is being served,” he told the Ynet news website. “My son is a good boy, honest and sensitive. He loves the Land of Israel and nation of Israel, and he was in the midst of enlisting into the army. He asked to give back to Israel, and unfortunately, they associated him with the [Duma] case, which we knew he was not connected to.”

The indictments of other suspects being held in administrative detention could be handed down this week, Defense Minister Moshe Ya’alon said Saturday night. However, prosecutors did not file a declaration of intent to indict the suspects during Monday’s hearing.