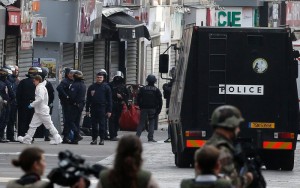 The suspects were “about to move on some kind of operation,” according to authorities.

Investigators told France TV Info that the imminent targets were the Charles de Gaulle Airport and one of Paris’s biggest shopping malls, Les Quatre Temps. One woman reportedly detonated a suicide vest during the raid, while one man was killed and seven others arrested. Read more at CNN.