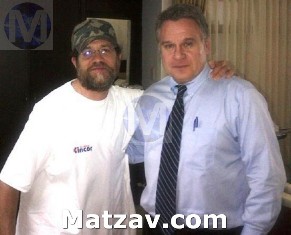 With Yanky Ostreicher being back in the U.S. after being imprisoned without formal charges for 20 months in Bolivia, then detained for nearly other year, Congressman Chris Smith (NJ-04), a leading human rights advocate in Congress, is expressing relief and happiness.

“We are overjoyed that he is free,” Smith said. “It has been a long, painful road for Jacob and his family. He needs time to restore his health and rebuild his life, and he needs time with his family. A great injustice has been done to him from which he may never fully recover.”

“I thank Sean Penn for his tireless work to free Jacob,” said Smith, who held a May 2013 congressional hearing at which Penn testified.

Two and a half years ago, Yanky was imprisoned on unsubstantiated allegations. Bolivian officials employed delay tactics and gave excuses for his continued detention. No evidence has been presented to indicate that Mr. Ostreicher is guilty of any crime. And there is no sign of the $27 million in assets from his rice farming operation that were confiscated.

Smith visited Ostreicher – whose daughter and grandchildren live in Smith district – twice in Bolivia. Bail was denied for over 18 months, but finally granted in December 2012. Smith visited him in June 2012 in the notorious Palmasano, a prisoner-run prison, and met with Bolivian officials to seek his release. In December 2012, Smith led a bipartisan congressional delegation to continue to press for his freedom, accompanied by Rep. Nydia Velázquez.

Smith has held three congressional hearings on the case. Ostreicher is now especially frail, due in part to his hunger strike to protest his imprisonment. During his confinement, he began treatment for Parkinson’s disease.

During the June 2012 visit, Smith met with the Bolivian Minister of Government, Carlos Romero, to detail Ostreicher’s story of injustice, including repeated court delays and complete lack of evidence against him. Romero told Smith he would investigate Jacob’s treatment. Over the past year, numerous people have been arrested in the case on charges of corruption, including the legal adviser to the Ministry of Government, Fernando Rivera. Smith personally observed Rivera interfering in the June court proceedings. Bolivian media reported that Romero stated he first became interested in the case as a result of his meeting with Smith.

In August of 2012, Smith held a second hearing on Ostreicher’s case entitled “Seeking Freedom for American Trapped in Bolivian Prison.” Chairman Smith also introduced “Jacob’s Law” (H.R. 1778). Jacob’s Law would prohibit the travel of foreign officials and their families’ to the United States if those officials are known to be complicit in the violation of fundamental human and due process rights of Americans imprisoned in their home country.