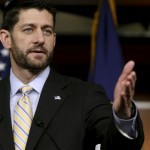 The measure would keep the government afloat through the 2016 budget year as well as boost domestic defense spending and increase the deficit by hundreds of billions of dollars through extending tax credits.

The package also would lift a longstanding ban on exporting U.S. crude oil, which the GOP saw as a victory, as well as the reauthorization and expansion of aid for emergency workers suffering from ailments related to the 9/11 attacks. The House and the Senate are expected to vote on the legislation on Thursday. Read more.