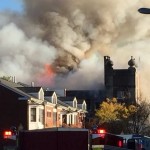 The ceremony was held at the site of the shul and the seforim were buried at Poile Zedek Cemetery nearby.

“After almost 115 years of enriching many lives, today has been the most tragic day in the history of Congregation Poile Zedek. But our sadness serves as a source of strength. May G-d guide us and enlighten us as to the future of the Congregation,” said Reuven Dorfman, Executive Director of the Synagogue.

“With the help of the Almighty and the assistance of the Jewish Community, we will rebuild Congregation Poile Zedek and bring it to greater and higher levels of holiness,” stated the Congregation’s spiritual leader, Rabbi Abraham Mykoff.

The rabbi rushed into the burning building on October 23rd and was able to save one of the Torahs.

The building was on the National and State Registers of Historic Sites since 1995, but Congregation Poile Zedek, which means “Doers of Righteousness”, dates back to the early 1900s. In its early years, most of its congregants were emigrants from Russia and other Eastern European countries. Today the Congregation is home to many Jews from the former Soviet Republics.