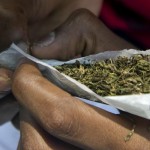 When the Associated Press first reported on this story, it erroneously stated that “the company says it will offer the world’s first certified kosher pot.”

There are, boruch Hashem, many kosher pots in the Jewish world.

The AP later corrected their story, reporting that a New York company says it will soon offer the first certified kosher medical pot. That’s pot as in marijuana. Or weed. Or cannabis.

Vireo Health says its non-smokable medical cannabis products have been certified as 100% kosher by the Orthodox Union.

The OU said that it granted its certification after inspecting Vireo’s facilities to ensure the marijuana was grown and processed according to kosher standards. Those include, for example, insect-free plants.

The AP reports that Vireo says the certification will help the company serve patients among New York’s Jewish population, the nation’s largest. Its program is slated to start next month and will serve patients in New York state with certain qualifying conditions.