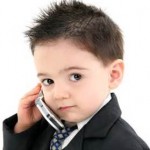 How young is too young? A study by the National Consumers League says 60 percent of U.S. parents offer cell phones to 10 and 11-year-old children.

CBS News reports the National Consumers League, commissioned the study the 2012 study; and since then, that average age has gotten even younger, and the prevalence of cell phones among teens and pre-teens has nearly doubled – according to Shawn DuBravac, chief economist and senior director of research at the Consumer Electronics Association.

“Today about 80 percent of teens between 12 and 17 own a cell phone, and about half of those own a smart phone,” said DuBravac. “That’s about twice the rate from just two years ago.”

Dropping her kindergartner off at Charles Wright Academy in Detroit – a pre-K through fourth grade school – parent Kaishia Burns said her younger child does not have a phone; but her son Keion, who attends fifth grade in another building, does.

“Last year at this school they let it be known that it was OK, as long as they didn’t use it in class or…it didn’t ring during class,” Burns said. “I’m gonna let them know that he actually does need a cell phone, seeing as that I’ll be at work and he needs to pick up his brother and I just need them to communicate with me to let me know everything is OK.”

Keion really wanted his own phone. “…I was asking for one,” he said, adding that it took “a little bit” of effort to convince his mom.

“I know a lot of parents want to get in contact with their child after school to make sure they got on the bus or make sure whoever’s picking them up picked them up – that’s OK,” Davis said. “But in school, if we see you with it, we’ll confiscate it.”

“Again, that’s the parents’ decision,” she said. “But, again, if they bring it to school we do not wanna see it or hear it.”

Some carriers, like Sprint with its “WeGo” device, are marketing cell phones to kids as young as five: “It’s not uncommon to see, really, 2 and 3-year-olds becoming quite fluent with using a touch tablet or a touch device,” DuBravac told CBS News. “So by the time they turn 6, 7, 8, they’re very comfortable with the mobile devices.”