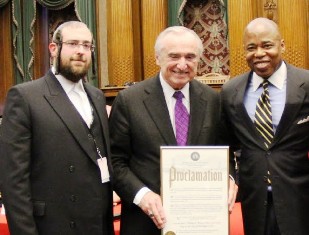 Flanked by local precinct commanding officers, as well as the bureau chiefs representing the community affairs, housing, transit and transportation divisions, Police Commissioner William Bratton promised faith-based and civic leaders, as well as community activists from across Brooklyn, gathered at Borough Hall that the police department will work collaboratively to reform policing and protect the communities.

The meet and greet forum was organized by Borough President Adams and coordinated by noted community leader Rabbi Abe Friedman to advance police-community relations in order to collaborate on shared goals with the NYPD, including improving pedestrian safety and preventing criminal activity. In his introductory remarks, Borough President Adams reminded the audience his work with Commissioner Bratton go way back to the early the 1990’s in the NYPD Transit Bureau.

“We are excited that this administration has made it clear that the police and community are one, as well as the challenges of the interaction of those who provide public safety in our community,” said Borough President Adams. “Today, you see the presence of those men and women who are on the command staff that serve Brooklyn and to ensure that the people of Brooklyn are served.”Rabbi Abe Friedman, intergovernmental director in the Borough President’s office, hailed the new police commissioner for believing and working in collaboration with the various diverse communities in the city. “[Bratton] believes, the same as Borough President Adams believes, that with collaboration and interaction with community leaders we can do so much more, especially build the bridge between the NYPD and community leaders,” said Rabbi Friedman. Commissioner Bratton on his part focused on the reforms he has implemented in order to further reduce crime rates but also involve the communities by working hand in hand.

“We intend to police constitutionally, respectfully and compassionately,” he said.”There is still so much work that needs to be done and that work cannot be done by police alone,” said Commissioner Bratton. “Even though we are good however, we are getting better all the time and we cannot do it without you, the people of our community.”Bratton then took questions from the floor. Responding to concerns about stop-and-frisk, the commissioner stressed that the policing tool in general must not be eliminated but used constitutionally and in a respected manner. As a matter of fact, Bratton declared that Stop-and-Frisk has been reduced by 90%. Borough President Adams surprised the Commissioner with a framed proclamation commemorating the meet-and-greet and thanking him for his continuing service to New York City.