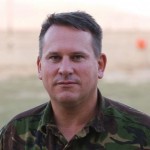 Having just returned from another tour of Sderot and discussions with Israeli soldiers at the staging area near Gaza, Col (ret.) Richard Kemp, the former commander of British forces in Afghanistan, sat down for an interview with TheAlgemeiner.

Deborah Danan: Why do you think the international community expresses such vociferous objection to IDF actions in Gaza?

Col Richard Kemp: Well, the starting point for so much of the world’s media, opinion-makers, political leaders, NGOs, human rights groups, will always be that whatever Israel does is wrong. It’s seen as oppressor of Palestinians, illegal occupiers – even of Gaza despite the withdrawal nine years ago – then already your starting point is at a disadvantage. Then add that to the fact that the Israeli military operations against Hamas inevitably include civilian casualties. The reason for that is because Hamas use as a key element – possibly the key element of their strategy – human shields. They want to lure and force Israel to kill civilians. And so you see images of dead babies, dead boys on the beach, women screaming about their children, and no reality can overcome those images. It’s understandable in a way, because it is heart-wrenching, I’ve seen firsthand what shrapnel can do to a baby, and it’s horrifying, and the problem is that there’s no reference, no open-mindedness to the fact that the only reason that these children have been killed is because of Hamas’ aggression towards Israel.

DD: Do you have any recommendations as to what Israel could do to change these perceptions?

RK: Israel is doing to a large extent what it can; obviously it’s got to have efficient and slick media operations to counter the distortions that are so common in the international media. But of course Israel is at a disadvantage there too because while Israel might understand the need to come out with a rapid rebuttal or message of the truth of what’s happening in the conflict, it still has to be utterly faithful to facts and cannot afford to get it wrong, or to exaggerate. Hamas, on the other hand, can say whatever they want and it doesn’t get challenged and if it does get challenged it doesn’t matter for them because they’re not accountable to anyone.

To me, the most important effort that Israel can make is not with the masses, rather it’s with the decision makers, the world leaders, after all, it’s their attitude and their understanding that will shape the way the West sees Israel.

DD: What specific steps do the US and the UK take to avoid civilian casualties?

RK: They have restrictive rules of engagement in conflicts where there is a risk of civilians getting killed, for example in Iraq, Afghanistan and Northern Ireland. They take strenuous efforts to ensure the minimum loss of life of civilian populations, including surveillance to verify the presence or absence or civilians, using appropriate munitions – that is, not dropping massive bombs if there’s a risk of killing nearby civilians, and sometimes the army might choose to go in on the ground to avoid the collateral damage from  airstrikes. Or for example, if you would attack an objective with all guns blazing, but you think that there might be civilians in the area, you might choose not to fire until you’re sure there is a positive enemy target, which of course puts your troops at a disadvantage, but it’s a risk you take to preserve human life.

Three days ago I spoke to an Israeli pilot that told me that the same morning he had aborted an enemy target a total of 17 times because there were civilians in the target zone, and eventually he abandoned the operation. I asked him, was that not frustrating? His answer was simply no. And that to me, is one of the best things about the IAF – that the last very thing they want to do is bomb a target and have that on their conscience for the rest of their lives. And it was the same thing with infantry soldiers. I spoke to soldiers who have been fighting in Gaza, and several of them said to me: ‘We know what the rules of engagement are but even without them, it is always on our minds that we cannot kill civilians.’ See for them, this has nothing to do with orders, it’s just always there at the forefront. We’re talking about [reservists who are] simply artists, metal-workers, musicians, they are not killers. They have absolutely no desire to kill civilians. In fact, in terms of civilian casualties, the attitude of IDF solders is the exact mirror image of the way they’re portrayed to the world.

DD: Tell us some more about the civilian to combatant ratio in conflicts since the Second World War.

RK: Since WWII, the average has been 3 civilians dying for every fighter killed. In some conflicts that number is higher, 4 or 5 civilians dead for every combatant. In Operation Cast Lead and Pillar of Defense it was 1-to-1 – and that’s a figure that has been agreed upon by the Palestinians as well.  Obviously, I can’t tell you what the ratio will be of this operation because it’s not at the end. What is discouraging though, is the willingness of media to simply report the number of civilians killed in Gaza and how many are children – figures which only come from Palestinian medical authorities which are controlled by Hamas. I don’t know if they’re true or not, but you have to make an assumption given Hamas’ track record for falsification of the numbers of casualties. It is however, quite possible that when this conflict ends we will see that the ration is more than 1-to-1, and if that is the case it is likely to be attributed to two things, one is what Hamas learned in Pillar of Defense and Cast Lead in the way to better protect and hide their fighters and weapons from Israeli airstrikes, including in underground tunnels, and number two, they know from Pillar of Defense just how much traction you get from killing civilians – and of course they want to capitalize on that.

DD: In your estimation, how much damage has Hamas inflicted from rockets that fall short and end up within Gaza’s borders?

RK: I don’t know – I couldn’t possibly estimate what it amounts to in total. But obviously, we’ve just seen that rockets fired by Hamas have landed on Al Shifa hospital and Al Shati refugee camp. There’s no doubt that their munitions falling short are causing significant civilian casualties.

DD: What’s the British attitude to the war with Gaza and do you think it’s changed over the last few operations?

RK: I think that the people in Britain have been heavily influenced by the photographs of dead children, by Hamas propaganda which incidentally includes of course, falsified photos of dead children – including photographs of dead Israeli children who are portrayed as dead Palestinian children. The Fogel family was attributed as a Palestinian family. To show you the stupidity of the people that do it, in the picture you can actually see a menorah. That sort of stuff influences the British people, plus the strident voices of many of the Muslim population in England who are outraged by the number of their Muslim brethren being killed in Gaza – yet who seem to have no outrage by the 190,000 killed in Syria. No protests, no outrage there, nothing. The attitude of the British public as a whole is negative. However, the attitude of the prime minister [David Cameron] has been much more supportive than we’ve seen in the two other conflicts in Gaza. However, I think that the British abstention in the vote of the resolution of the UNHRC in condemning Israel and investigating war crimes is an act of moral cowardice by Great Britain, and one which undermines the otherwise strong support given by the government to Israel. When political leaders tell Israel to take more steps to reduce civilian casualties – thereby inferring that Israel is not doing enough and is somehow happy to cause civilian casualties – that kind of message encourages Hamas to continue their strategy of human shields and furthermore, encourages other extremist groups around the world to follow the same strategy. And that leads to the death of innocent people. Ban Ki Moon is guilty of this, David Cameron is guilty of it, Barack Obama is guilty of it.

DD: How has the British army in Afghanistan gained from the Israeli army’s expertise?

RK: There are a number of elements that Britain has taken from the Israeli army. One of which is methods of reducing civilian casualties that we’ve seen in operation since Afghanistan, where Britain has adopted tactics like leaflet dropping on targets with potential civilians in the area. British soldiers lives have also been saved by Israeli battlefield medical technology and also by Israeli counter-bomb technology, that is, technological equipment that stops or detects improvised explosive devices like roadside bombs. British soldiers’ lives in Afghanistan have been saved and are being saved by that technology. Beyond that, British and Israeli intelligence cooperation is extremely tight and that has saved the lives not just of soldiers but of British civilians as well. By the way, British soldiers and ex-soldiers strongly support Israel and the IDF because unlike many civilians, they understand the threat that Israel faces they understand the tactics used by Hamas and they understand what the IDF have to do to deal with Hamas because those same tactics are used by the Taliban and in response, British soldiers have to use the tactics of the IDF to fight them.

DD: Finally, do you have a message to the Jewish People?

RK: I would say that the Jewish people should be extremely proud of the state of Israel, they should try their best to disregard the terrible anti-Israeli propaganda that is designed solely to contribute to the conspiracy to exterminate the state of Israel – I myself, am personally outraged by the shocking anti-Semitic violence and verbal attacks that have been triggered by this conflict against Jews, especially in Paris and Germany, but also in Britain and other countries – it’s absolutely despicable and should be fought by authorities as vigorously as possible.

Israel is the one country in the western world today that is standing up for its morality and for its values against the onslaught of international jihad.