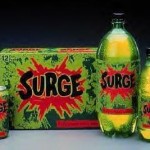 Years of hard campaigning on Facebook by about 130,000 hardcore fans of the discontinued soda Surge has resulted in Coca-Cola bringing back the drink for the first time in 12 years.

The soft drink company first released Surge in 1996 as its answer to the PepsiCo-owned Mountain Dew but pulled it off shelves in 2002. The neon-green cult classic returned Monday but is available only online.

Coca-Cola announced on Monday that they were going to bring Surge back exclusively on Amazon.com, at a cost of $14 for a 12-pack, as a direct result of years of campaigning by hardcore fans.

The SURGE movement started in 2002 by asking their 130,500 fans ‘where was the last place you had SURGE?’ And by non-stop posting of Surge memorabilia found at flea markets and other places.

Websites like SaveSURGE.org and SURGE movement on Facebook also tracked appearances of Surge in pop culture and in the media.

Surge fanatics’ pleas to get their sugary citrus fix did not fall on deaf ears.

An official statement released by Coca-Cola said that the decision was driven “thanks, in part, to a passionate and persistent community of brand loyalists who have been lobbying The Coca-Cola Company to bring back their favorite drink over the last few years.”

Amazon sold out within the first hour of releasing them online. The online retailer re-stocked and warned customers it might be a few days to receive their products, but again sold out several hours later.