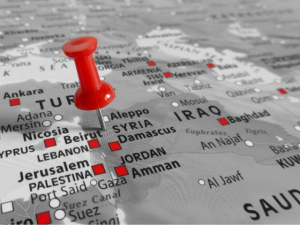 An article published on CNN’s website featured a map ​that erased Israel and replaced it with “Palestina,” a Spanish or Portuguese translation of ​”​Palestine​”​ the HonestReporting media watchdog revealed​.

“Following the publication of this post and the complaints of many HonestReporting subscribers, CNN has removed the map in question and replaced it with an image of the aftermath of a Syrian airstrike in Aleppo,” said HonestReporting.

​”Whether it was an oversight or something more sinister, CNN’s illustration of the Middle East without Israel is completely unacceptable.

“At a time when the state’s very legitimacy is being called into question by vicious anti-Israel extremists, any message that Israel does not belong in the Middle East plays into this false narrative and feeds those like the Iranian ayatollahs who wish to see Israel erased from the map.

“How many times can CNN keep making these shoddy errors before the network takes remedial action to address its Israel problem? We fully expect CNN to replace this inaccurate map as quickly as possible.”