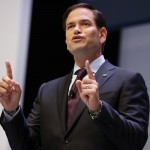 A new CNN/ORC poll shows Democratic front-runner Hillary Clinton maintaining her commanding lead, though she would face a challenge from the top three Republicans if a general election were held today.

Clinton’s national support had been waning, but she was able to boost her numbers following Saturday’s Democratic debate.

The poll talked to registered voters who are Democrats or independents who lean Democratic.

Here’s how Clinton fares in head-to-head matchups with the top three Republicans among registered voters: