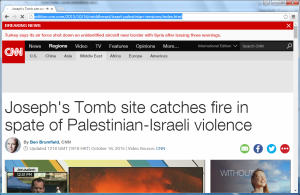 A pro-Israel media watchdog says CNN changed the headline to a story about Palestinian arson at Kever Yosef after it was contacted by the group.

The original headline, shown in the image below, stated that Kever Yosef had caught fire. 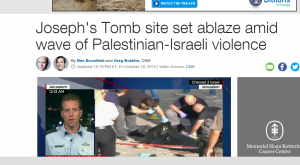 CAMERA responded incredulously. “OK. So Joseph’s Tomb just ‘caught fire.’ Really? How? Was it an ‘electrical fire?’ like the one that the Palestinian Authority says took place at Charbel Monastery in Bethlehem a while back?” the group asked, referring to the fire at a Bais Lechem monastery last month that Church leaders blamed on Palestinian Islamists.

The nonprofit said it reached out to CNN to change the headline, which was later on Friday changed to reflect an attack.

“No, Joseph’s Tomb did not ‘catch fire.’ Palestinians set it on fire. They torched it. They set it ablaze. They initiated its combustion. It did not ‘catch’ fire. It did not spontaneously combust,” CAMERA continued, saying CNN’s reporting of the Israeli-Palestinian conflict has held Israel to a “disgusting and dishonest double standard.”

Meanwhile, Abbas on Friday condemned the torching of Joseph’s tomb, which is a heavily guarded holy site in Shechem (known to Palestinians as Nablus) already destroyed once along with an attached yeshiva by Palestinians during the Second Intifada in 2000. The PA president also called on Palestinian law enforcement to investigate the fire.

The IDF announced it took the incident “very seriously” and would work to bring the arsonists to justice.